Woo hoo, today we are off to Kraków.  Our flight leaves at 6.25 am, so the alarm is set for 2.50 am.The plan was to go to bed last night at 8pm so we could get plenty of sleep! Typically, I’m still wide awake at this time.  I know that going to bed when you are not tired is not good for you, so I decided to watch a bit of t.v, to see if that helps.  I eventually feel the need for bed about 9.30pm.

The dogs went to kennels yesterday.  The house is so quiet.  It’s strange not having to put them out for their final toilet break before bedtime.  I’m missing them already.

I always worry that I will oversleep when I have something important to wake up for, so I have set 2 alarms, and asked hubby to make sure his is on too.

I wake up just after 1am and force myself to go back to sleep, but I just can’t! By 2 am, I’m wide awake!  I’m going to be so tired later!

At 2.45 am, I decide to make tea for us both. I always have a pint of green tea every morning, which takes a while to cool down enough to drink, so I jump into the shower in the meantime.

The plan was to leave the house at 3.30 am, but just before then hubby realised he hadn’t notified his bank that he was going away.  Eek, neither had I! So we both have to quickly log into our computers to do it.  I’m now panicking a bit, as we are late leaving, and there is no guarantee either of our banks will update our accounts in time!

We are booked into a carpark at the airport that we haven’t used before, so we have to use the postcode!  The sat nav in my car is nearly 4 years old, it doesn’t recognise the address!  I was originally going to drive, but as my reading glasses were to hand, hubby and I swap places!  Thankfully the  Sat nav on my phone recognises it, so we find it easier than we expected.

We eventually get parked and to the airport, not as early as I would like, but we are here!

We have 40 minutes before we have to go to our gate, so we pop to Burger King for some breakfast.  Why is it so expensive to eat and drink at airports?

I’m also a bit worried about being able to draw currency when we get to Kraków, so I decide to buy some  currency at the airport.  It’s better to be safe than sorry!

A quick trip to WH Smith for water and some sweets is all we have time for, before we have to board!

We have our usual seat positions!  Hubby with the window seat, and me in the middle.  For a long while the isle seat next to me was empty.  I don’t know about you, but I always hope it stays empty, so we can stretch out!  It rarely happens, and today is no exception.  It’s quite a full flight!

We are flying with Jet2.  They are not a bad company to fly with.  My only negative is, that there is nowhere for you to put your bottles of drinks.  There is a cup holder, but it’s too big  for hubby’s Fanta and too small for my water!  Sounds like something out of the 3 bears!

The just right was a green tea which I bought in the flight!  I tried to sleep, but as usual I can’t!

The flight is just over 2 hours, so not too long. We thankfully arrive ahead of schedule!  There is a short ride from the plane to passport control!  I’ve never been in such a long slow queue!  They only had 2 desks open to deal with a plane full of people!  They do eventually open 3 more desks, but jeez!

By the time we get through the carasel for baggage has stopped, and the flight no longer listed on the board, so I had to hunt round to find our bag!

We had pre booked a car to pick us up at the airport, to take us to our hotel.  We are staying at the Rembrandt Aparthotel in the old town.

We are joining 3 other couples  there.  As we have all come from different places in the uk, they arrived late last night.  The weather promises to be mid 20’s, so it should be a good weekend!

Our driver is lovely and friendly.  The trip only takes about half an hour!

Our room isn’t ready yet, so we drop our bags in a friends room and go off exploring.  As we are staying in the old town, it only takes minutes to hit the main square. 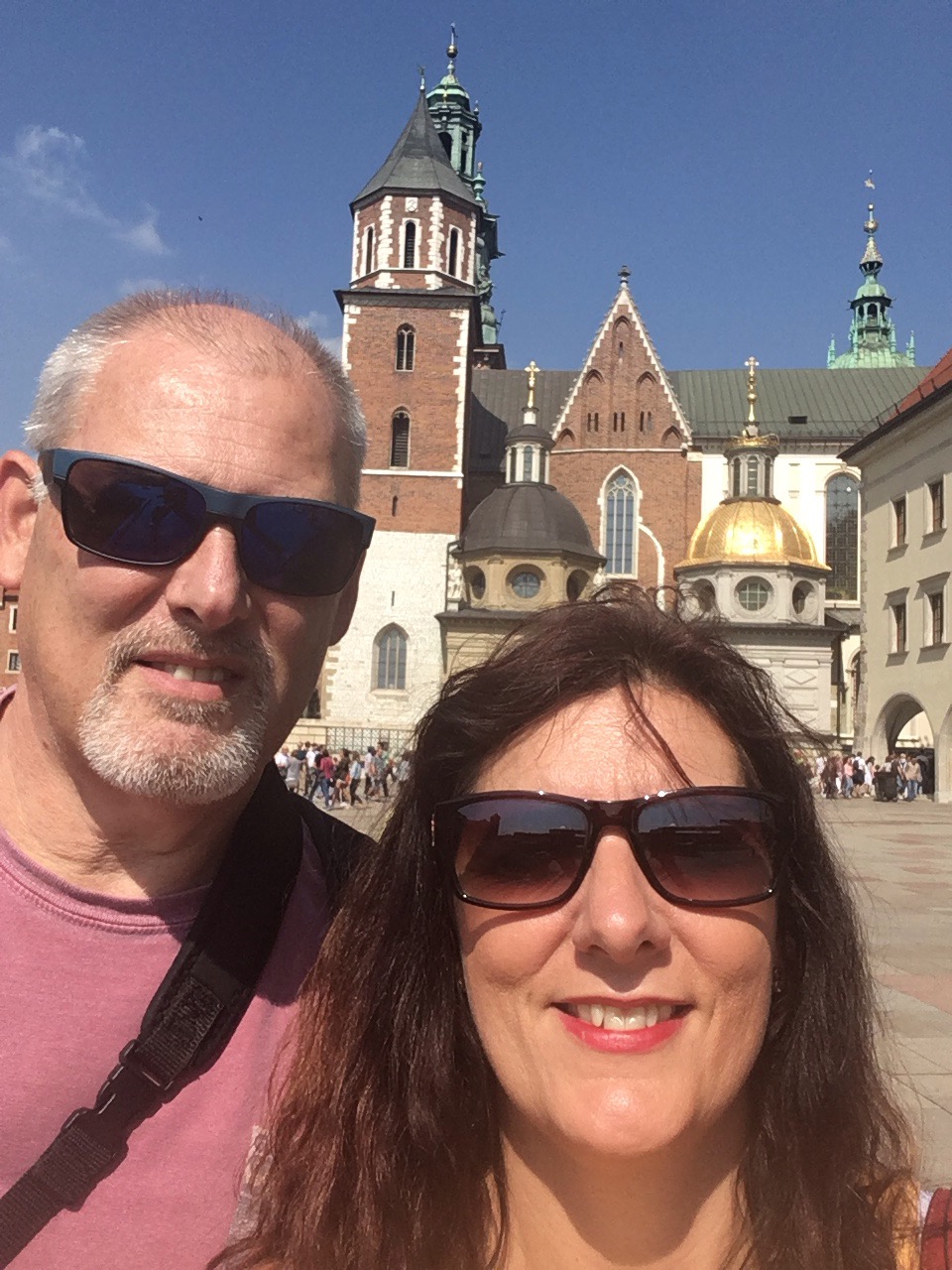 Tonight we are heading to the Jewish quarter for dinner!

The plan over the weekend is to visit the 2 concentration camps – Auschwitz and Berkenau, the salt mines, castle, and the old town.

Keep following my blog to see how the weekend goes!

I’ll upload photos to my YouTube channel when I’m home too, so don’t forget to subscribe to it too!

One thought on “Kraków here we come!”