Ok, I’m quite a tolerant person, but enough is enough!  Once again not long after 5 am the dogs next door start barking!  Of course, that is going to wake up Fido and Lola, who have been fast asleep all night.

The problem is, with Lola and Fido, they are really good all night.  Once they have had their evening walk that is it until they wake up again.  Once they are awake both will need the toilet.   Even if I wanted to ignore them I can’t! So once again I am out walking them early!

They are both really good now at going in the new place, so I don’t spend as much time out in my pj’s with them!  Mind you I say that, but I’ve done over 3000 steps before we have left the cottage for the day so maybe more than I think!

Hubby and I both decide that once next doors dogs start barking,  there is no point in trying to lay in bed.  They don’t stop until the family obviously get up to them, which is not for another 2.5 hours!  I can’t believe they can sleep through it or even ignore it.  I don’t let my dogs bark for even a few minutes, for my own sanity, for their behaviour and also for anyone around who may hear them!

I was already cross with the owners last night.  I took Lola and Fido out about 11.30 for their last walk of the night.  It’s pitch black out the back, so I only had the torch off my phone for light!  They just opened their back door and let their two run out.  Both were barking and ran straight to Fido.  They were barking in his face.  He was on a long lead so he could have a bit of freedom.  I couldn’t see him very well and was desperately trying to pull him back to me.  I was calling to Fido so they opened the bedroom window to look.  They gave me the look that I was in the wrong.  My 2 dogs were on leads and behaving!  Their 2 dogs were barking and running riot!  I was not impressed.

The male owner is a big guy and hubby had advised I don’t say anything to him!  I fully agree, we are only here for a week so it’s not worth a fight,  but I am not a happy chappy!  Another night of only  5 hours sleep and I’m certainly not impressed.  I get up at this time every day for work.  I go to bed early to make up for this which is my choice.  I don’t expect to have to do the same on holiday, just because next door can’t control their dogs!

Anyway I’m not going to let it spoil my holiday!

Today we decide to do a walk around Buttermere Lake.  After yesterday, we decided something flatter might be better for all of us and the dogs.

The drive there is a nightmare! You have to go over Wrynose Pass again – we did that on Sunday too!  It’s so scary at times, sheer drops with thin single track roads.  There isn’t many passing places either, so not great on the nerves. 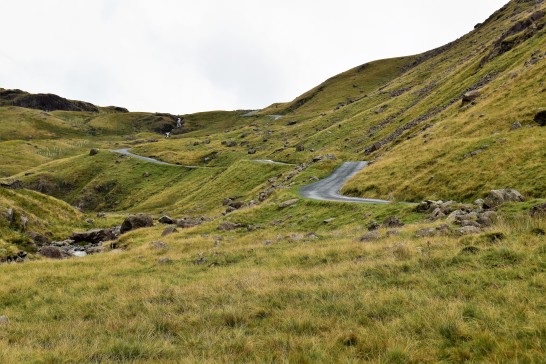 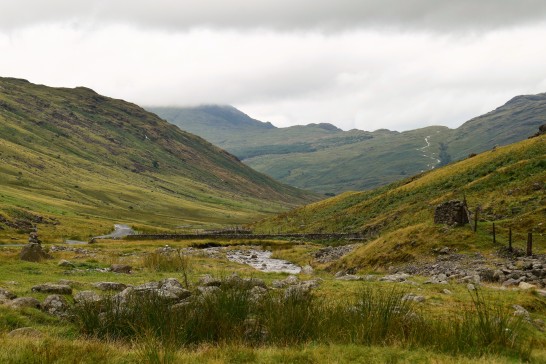 You then go through my favourite town in the Lakes, Ambleside then Grassmere!  Next you head to Keswick.  We needed to get something from the town, so had a quick stop off there.  I stayed in the car with the dogs.  It was a good excuse to try and get the first reception on my phone in over 2 days!  I got a little, but not enough to get all my emails and messages sadly!

The next stretch was over Honister Pass.  This is another steep climb before we got to Buttermere!   The journey should have taken us around 1.5 hours, however due to traffic and lots of lorries trying to pass on narrow roads, it ended up nearly 3 hours!

We are looking for National Trust parking but end up behind the Fish Inn.  Parking there is £6 for only 4 hours!  I don’t know about you, but I think that is expensive to park on what is effectively gravel!  What is worse, you have to pay 30p to spend a penny!!

The weather is a mixture of showers and sunshine.  We have waterproofs, so we are not going to let the weather stop us getting out!  We did over 25000 steps yesterday, so I don’t want today to be much less than that!

Lola broke her lead before we came away.  I thought I had repaired it!   We had swapped it onto Fido as he doesn’t pull as much.  Today of all days it decided to fail again.  Fido didn’t mind.  It is an extendable lead and now it was full length.  Yey, so he thought!   Not likely!  I had to use Lola’s figure of 8 lead which wasn’t ideal, but did the job!

The changing weather really transforms the landscape in the Lakes, and today is no exception.  The walk is quite relaxing but there still is a lot to see. 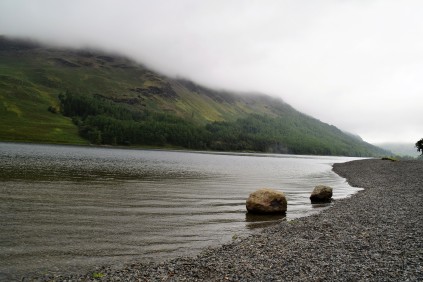 The walk takes just over 2 hours and is 8 km. We stop at the car again afterwards and have lunch.

My walking shoes have this holiday started to fail me.  I’m gutted as I love them.  They are 12 years old, so have done me well! I have a summer pair and winter pair, and these are my summer ones!  We decide to call back into Keswick on way back and get myself a new pair.  I saw a pet shop there on the way in this morning, so plan to call there too to get a new lead!

The route home started off easier!   We didn’t have to do the Honister Pass.  Woo hoo!  The sun was out when we left Buttermere so I had high hopes for the journey home!  In Keswick it was still warm, so yey!

I bought my boots and a bit random, but a pair of binoculars too!  I have a small pair, but they are not great for birds of prey at a distance!  Along with sheep and highland cows, I have a fascination for birds of prey!  Who knew that Millets give you 15% off if you are members of National Trust!  It would have been rude not to buy them!

I also managed to get a new lead for the dogs.  I love the extending leads, but I won’t have the cord ones, as I have seen and experienced too many friction burns from them.  I am sure they are great for small dogs but definitely not my size dogs!

I start the drive back to the cottage.  The road isn’t too bad, but then I remember I have to go through Wrynose Pass!  What is worse, it starts to rain really hard!  My heart is in my mouth!  There are so many steep drops and the roads are steep, twisting and very narrow!   I really don’t feel happy doing this drive.  Its only 10 miles, but believe me, it feels like 100!

I am so glad when I see our cottage.

We get out the car and guess what?  The neighbours have gone out and left their dogs again, and they are both barking!  Great!

I am so so tired today!  I prepare dinner and while its cooking have a quick shower!  Time for a nice glass of Slimline Wine!  I so deserve it!

Keep watching my Youtube channel for more photos of today, including some gorgeous scenery and cows.