So this Saturday hubby and I headed to the Arena in Birmingham to see, for the first time, Madness.  I can’t believe it has taken me so long to see such an iconic band live! 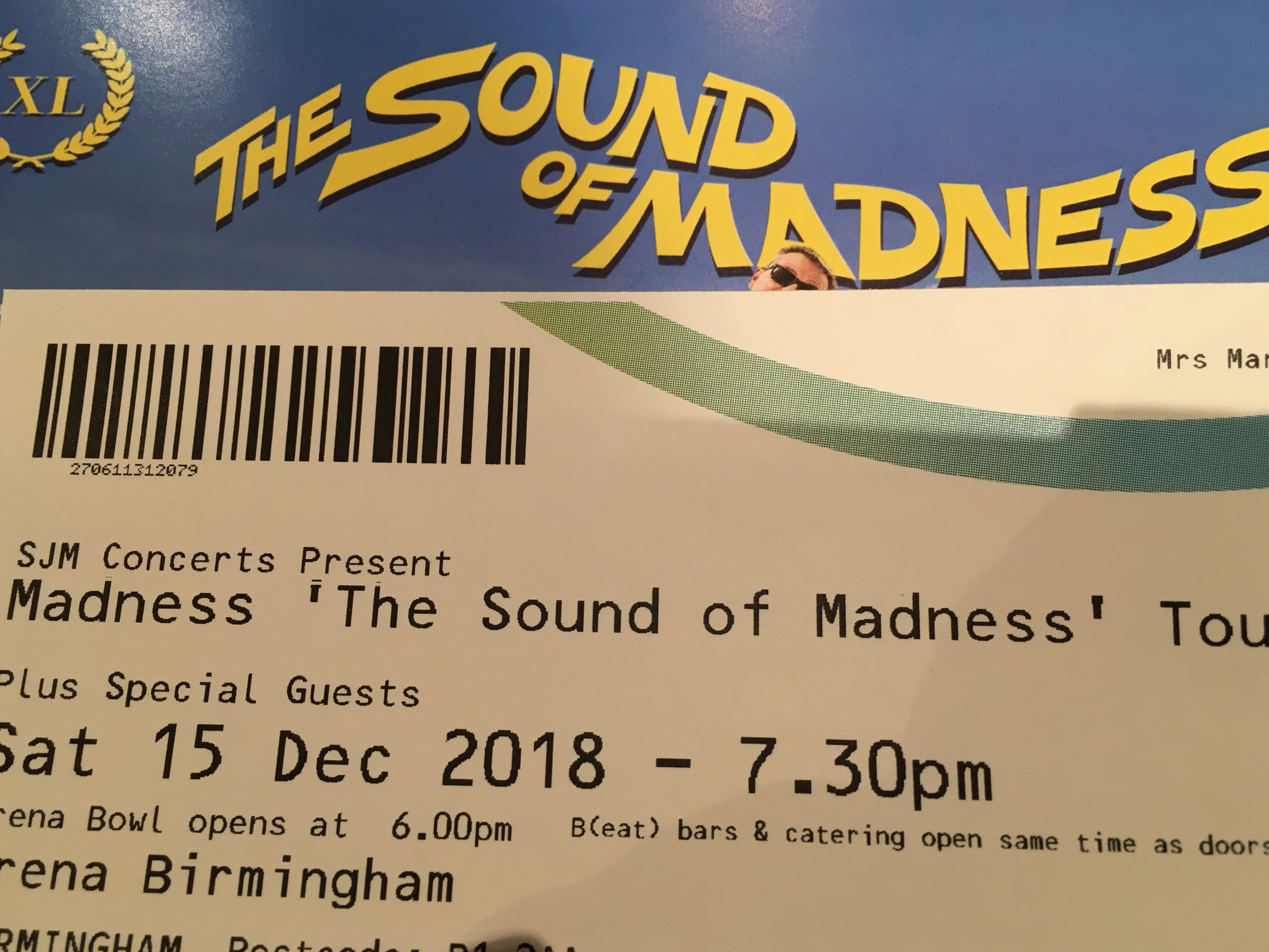 We had amazing seats, to the left of the stage, so we could look down on the band.

The Scottish band Fratellis started us off with some of their best songs, including Chelea Dagger.

During a break, they showed some old adverts, which were hilarious.  Then the build up to the band started!  I was so excited!

The band first formed in 1976 under the name of The North London Invaders.  They didn’t get their name Madness until 1978, however as I was only born in 1969, I only know them as Madness.  Due to my age, it wasn’t until the 80’s that I really got into them.

For me,  I have also only ever known the band with Suggs in it, however he was not in the original band.  In 1976, the band members were Mike Barson (Monsieur Barso) on keyboards and vocals, Chris Foreman (Chrissy Body) on guitar, with Lee Thompson (Kix) on saxophone and vocals.  John Hasler on drums and Cathal Smyth (Chas Smash) on bass guitar came later, followed by Dikron Tulane as lead vocals.

Suggs (Graham McPherson), saw them performing in a friends garden in 1977, and  joined the band, where he became lead vocalist.  The rest as they say is history!

Dikron then went off to follow a career in acting, so was replaced by Gavin Rodgers.

Suggs was thrown out of the band after choosing to watch his football team – Chelsea, rather than turning up for the rehearsals.  Thankfully for us, he was allowed back into the band in 1978.

There were various changes amongst the band in the early years with arguments here and there.  Band members leaving then rejoining, or going off to do other things!

As well as a change of band members, they also changed their name to Morris and the Minors for a brief time, before deciding on the name we know and love today – Madness.

By 1979, the band was now 7.  Mark Bedford (Bedders) on bass guitar and Dan Woodgate (Woody) on drums, replaced Garry Dovey and two of the band members, with Chas Smash rejoining as backing vocalist.

I wonder if those that left the group back then, ever regret it now?

Seeing them live on Saturday, you would never know they had been going for 40 years.  They were still fresh and full of energy.

During the whole concert, Suggs personality shone through. As Londonders (the band came from Camden Town), you could really hear their local twang!  Very down to earth, and you couldn’t help but see the cheekiness of the group!

Suggs had great stage presence, and you could see the friendship with the guys on stage.  I have to say it was one of my best ever concerts!

The music was fantastic, playing many of their favourite hits, including their only number 1 hit – House of Fun.    I can’t believe they only had 1 number 1 hit, however they also had 15 singles reaching the top 10 – Baggy Trousers, One Step Beyond, It must be Love, Driving In My Car, Winds Of A Dove, to name a few, which were played too.

Everyone was having a great time, joining in with the Madness!

What was evident, was that this band had truly stood the test of time.  The songs were as relevant to day, and as easy to listen to, as they were when they were first released.  I wonder how many bands from today will be able to say the same?

I left the concert on a complete high!  Even after the concert, we were played out with the song ‘Always Look On the Bright Side Of Life’, which had everyone singing along!

If you ever get a chance to see this amazing band live, go.  You really won’t regret it!