You will never go hungry or thirsty in Krakow! There are absolutely loads of options open to you !

The big decision is, do you want food on the go, in a relaxed or formal setting, inside or outside !

When we go away, we like to eat local food. You will find a MacDonalds everywhere in Krakow, but there is no way you would find us eating there. We can have one of those at home!

The weather for us was gorgeous, so it was perfect for sitting outside!

We were staying a few minutes from the main square, so we tended to gravitate there!

There are many restaurants running around the square. Each have their menus on boards outside, so you can check before committing yourself.

Don’t worry if you think the menu is limited in some, they have just put a selection on display! Ask them for a full menu.

Most staff speak very good English, so if you have any specific requirements, they are happy to cater for you.

On every corner you will find a little stall selling ‘Precels’! These are rings of bread, and delicious, perfect for eating on the go. They come in various toppings, cheese, sesame, spicy and salted. At only 1.8 PLN (approximately 45p) they are a bargain! We had them the day we were running for the train to the Salt Mine, for breakfast, as well as to take to airport when we left! 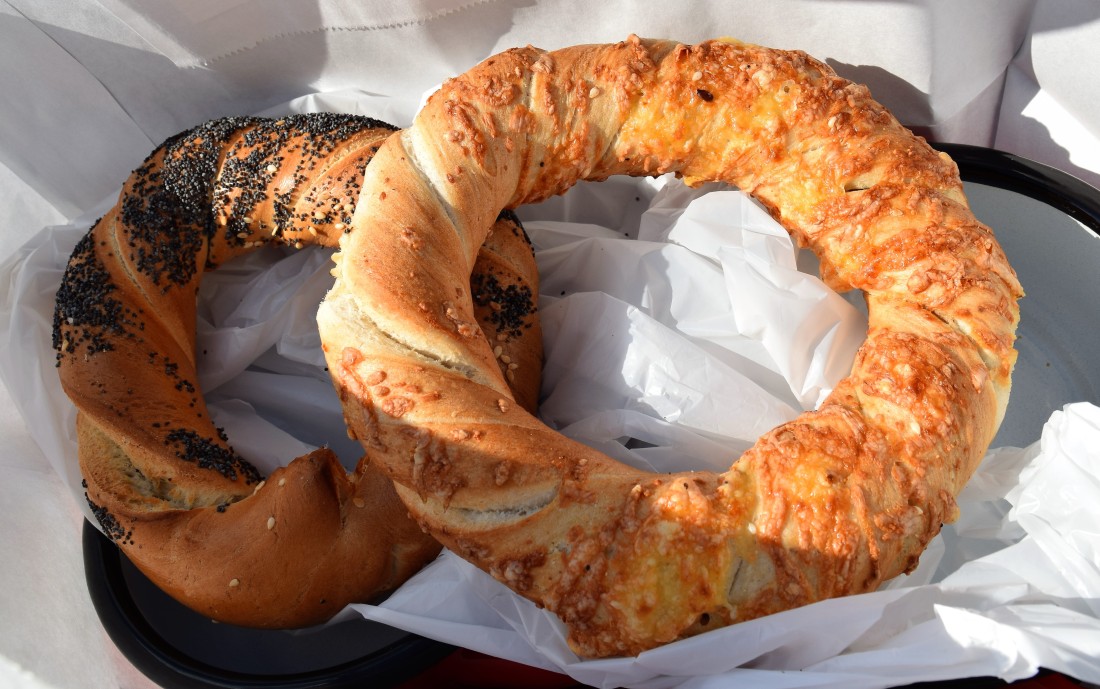 If you want to sit down, don’t be fooled by the price! Most meals are under £10! That doesn’t mean the portion is small! Oh no! This is one of my dinners ! It was a starter but I had it as my main!

That is a litre of beer next to it! It was filled with a selection of meats including, chicken, pork, Polish sausages and beef, with sauerkraut in a dry sauce! It was very filling so the bread wasn’t eaten!

Other local dishes include Bigos (hunters stew) which is also served in a bread bowl, smoked sausages, Pierogi(dumplings), which are stuffed with a variety of fillings ranging from cheese, minced meat, cabbage and mushrooms.

Don’t forget the good old pork schnitzel too! These are also usually the size of a dinner plate! 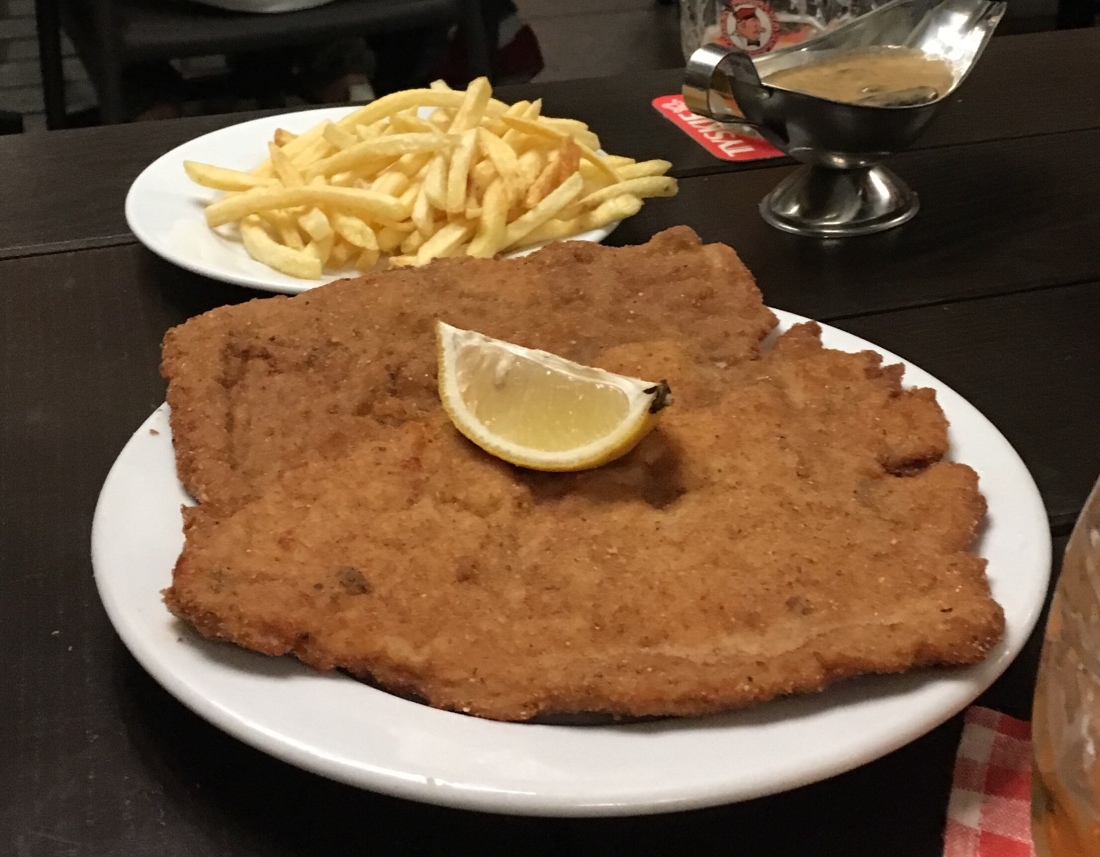 And one of my hubby’s favourite, the pork knuckle! Be careful when you choose this option as some are a set price, others are charged per Kilo! This is the one my hubby ordered! It was 1.2 kilo ! Way too much for 1 person! 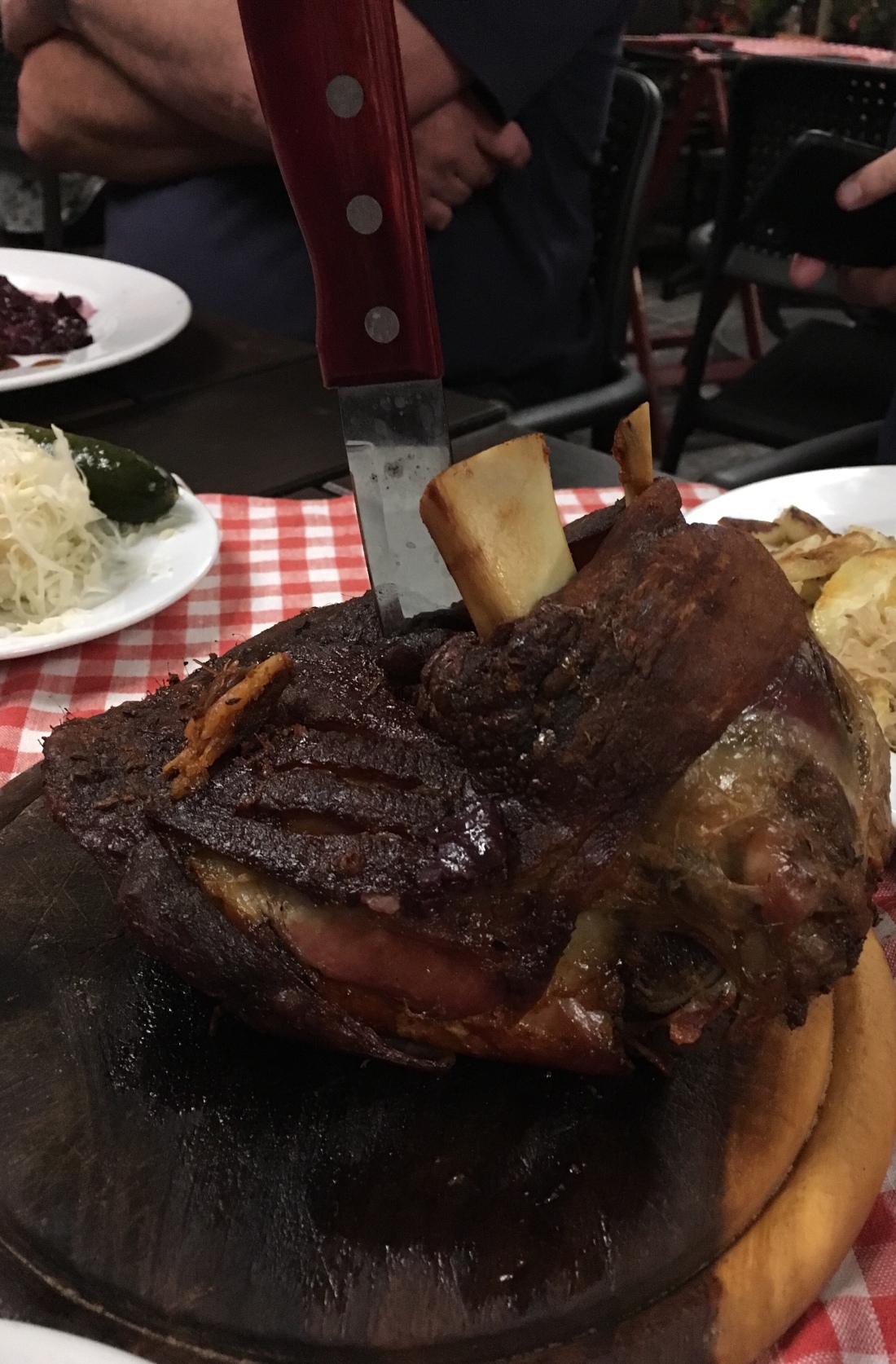 Every meal is served with bread, but rarely butter. If you want it, ask. I’m sure most restaurants would be happy to provide you with some!

What was lacking for me though was the lack of vegetables. Some dishes came with potatoes but that is all. You will need to order vegetables and salad as an extra!

My tip would be to order your drinks, look at the menu, and then look what others have had ! It will give you an idea of how it’s served, and more importantly, the portion size!

You can share a main, or even ask for a doggy bag!

If you are visiting the Salt Mine, I would recommend the sausage for lunch ! For 15 PLN, you get a large sausage, bread roll and a bottle of Coke, which is less than £4! It’s delicious!

We had most of our meals at the same restaurant. Why? It was sooo good! And the beer was the cheapest we had found ! 17 PLN (£4 ish) got you a litre of their local beer! It was one of the very few without patio heaters, but as we were lucky with the weather it didn’t matter!

So what was that restaurant ? Sukiennice! It’s named after the building it’s located in – Cloth Hall! Sukiennice is its Polish name. 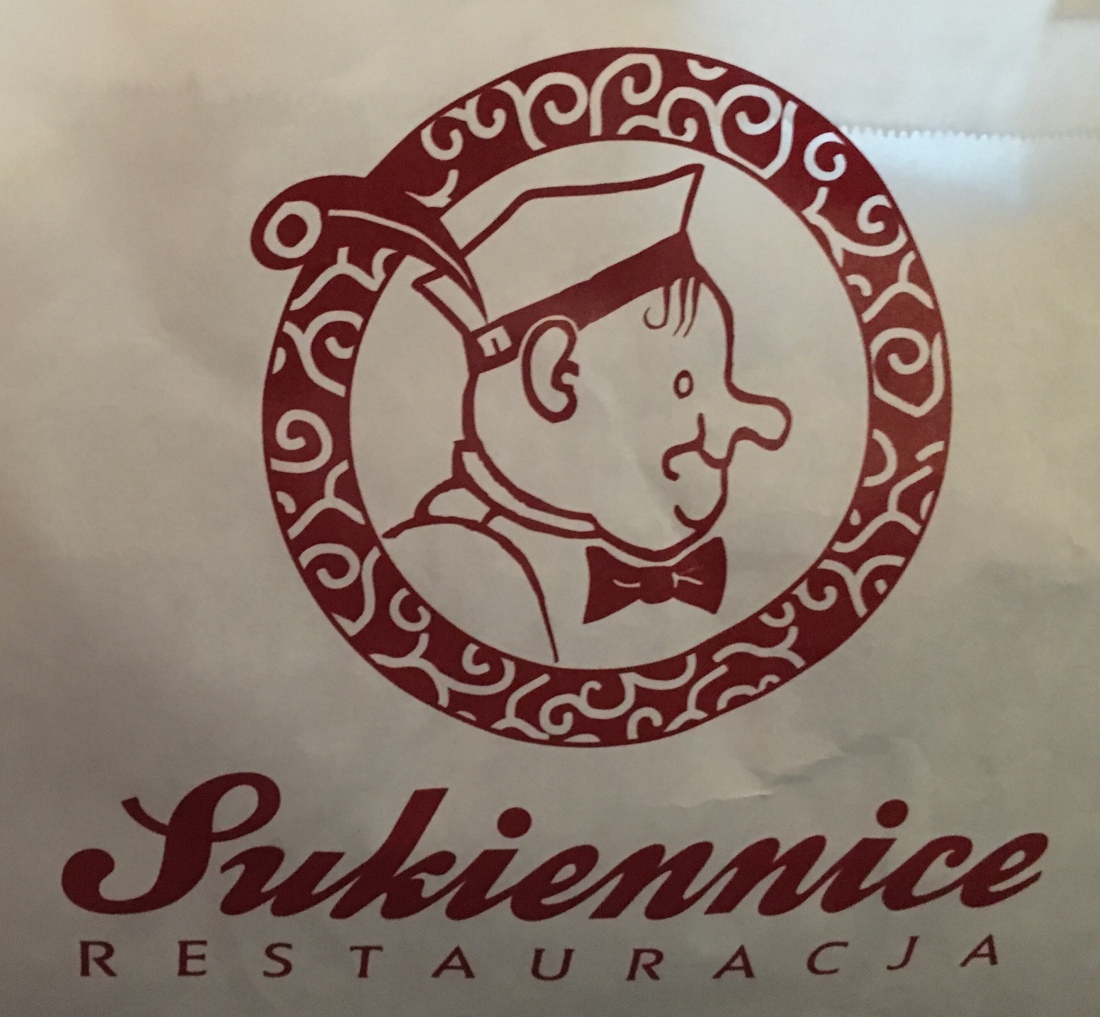 Breakfast was also the most reasonable we saw! Scrambled eggs (3 eggs) wit bread was only 9 PLN (less than £3), you could them add extras such as bacon, mushrooms, cheese etc for only 1 PLN (25p)!

I opted for one of their bagels for breakfast. Beetroot, rocket and walnuts. Oh wow! What a taste delight! At only 9 PLN (just over £2), it was a bargain!

Beetroot is a traditional food item of Poland. Most restaurants will have a delicious beetroot soup on its menu, served hot and cold!

They had a good selection of tea and coffee too!

Because it is on the square, you get to people watch, while eating, which I always enjoy! 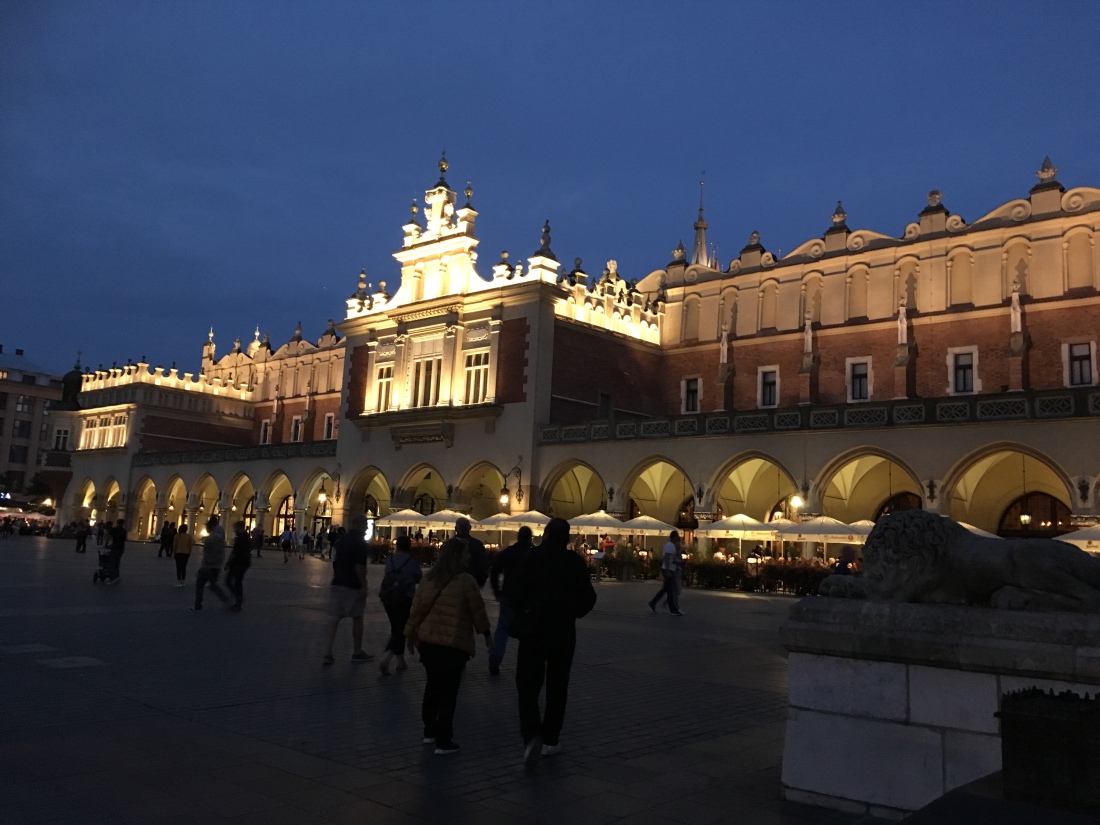 They also have a cosy basement for late night tipples!

Another restaurant I’d recommend is Chopin! It’s on the opposite corner of the square!

The head waiter was such a charmer! When I tried to make a joke with my friends that they didn’t serve alcohol, he joined in. He told the group they only sold potato water, grape water and hop water! Aka vodka, wine and beer!

I had one of the very few salads here! Roast beef! It was cooked to perfection and at only 23 PLN (less than £6).

When in Krakow, I would also recommend a walk to the Jewish quarter. There are also some lovely restaurants there too!

I’m sorry but I can’t remember the name of the one we ate in, but wow, it had the best bread I’ve ever eaten!

I had had a big lunch, so wanted something light for dinner! I chose a mushroom soup, served in a bread bowl! The soup was good but the bread, out of this world ! If you had the hunters stew here, it also came in the same bread bowl.

The bread was firm enough to hold the liquid, but light and flaky to eat! I wish now I’d asked how they made it! I can still taste it today, a week later!

On our last day, we had lunch at Max 18 in the square! I had chicken kebab, salad and chips! Again a really large portion of food!

What was exciting though, was behind my shoulder, in the next restaurant, they were filming! I asked our waiter what was happening. It was a scene for a local Soap Opera! I didn’t recognise the main man, but still, it made for an interesting lunch !

I’m usually a wine drinker, however it’s a bit more expensive in Poland, so I stuck to the beer!

Local beers are really easy to drink. Price ranged from 10 PLN for half a litre, to 17 PLN for a litre at Sukiennice Restaurant. So basically £2.50 to £4.00.

The two we mainly drank were Tyskie and Zywiec. 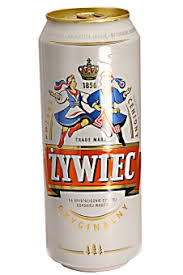 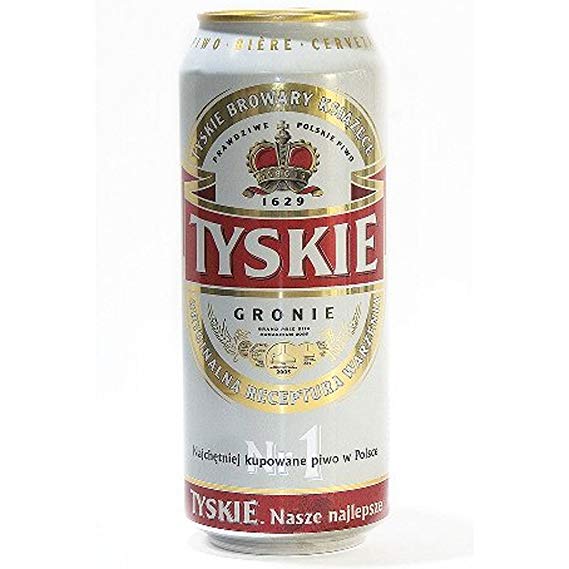 When in Krakow, it would be rude not to try their specialty!  Vodka!  At home, I love toffee vodka, but here, I would strongly recommend the cherry and hazelnut.  If you like Ferrero Rocher, you will love the hazelnut one in particular!  Its like a liquid version of it!  It was so nice, I had to buy some at the airport to bring home!  At only 16 PLN a bottle (£4), it would have been a crime not to!

All restaurants will offer a range of soft drinks too.  The homemade lemonade is also a really good choice, if you don’t want anything alcoholic.  You don’t get tap water on the table, so if you do want water, you will need to pay for it.

When you pay the bill, they will also give you a little shot of cherry liqueur, which is really really nice!  It certainly leaves you wanting a second!

Krakow is definitely a place worth a visit.  Make sure you try eating and drinking local specialties.  You won’t be disappointed!