So I can officially call it a ‘date weekend’ as hubby’s birthday is now officially over!

It was due to be raining this morning, but I am pleased to say that even at 7 am the sun was out.  Yesterday we ran out of time to visit Hardwick Hall, which wasn’t a bad thing as it also started raining around that time. The plan today was to do a 10 km walk however we decided to put this off to a time when we had the dogs with us.  Instead, we will get up, have breakfast and head off to Hardwick Hall.  If we have time later and the weather holds,  we will go for a walk.

Breakfast at the hotel is buffet style.  I always say you can tell the quality of the hotel by the breakfast especially the fruit salad.  If it’s tinned its lower quality, up to all fresh – top of the class!  Today its a bit of both which is about right for this hotel.  The hot buffet is full of variety including the usual suspects of bacon, sausages, beans and fried eggs, along with black pudding, mushrooms, grilled tomatoes and hash browns.  Great for my hubby but not for me though.  I was impressed to see gluten free bread.  This is not always readily available for anyone who needs this.  There is also a good mix of cereals with full fat and semi skimmed milk and even soya milk.  My friend Heather would be very happy with this breakfast selection.

I opt for the healthiest option of the fresh fruit salad with weetabix and semi skimmed milk, followed by baked beans, the better of the fried eggs, grilled tomatoes and a few mushrooms.  I don’t have any toast or bread as I had already had my HEB for a my weetabix.

We check out and head to Hardwick Hall.

Before I tell you about our day, let me give you my thoughts about the hotel.

The above is the photo you see on all the brochures.  It looks absolutely lovely doesn’t it, however this isn’t the part of the hotel you see!  The smaller building next to it is some ambulance depot or something, then you come to the main reception building.

The hotel is very large with 150 bedrooms and 36 meeting rooms that can cater for anything from conferences to weddings.  Being a Saturday, there was a wedding on so the hotel and carpark was quite full.  There also seemed to be some rugby tournament for young boys on as there were hundreds of lads running around in their team rugby kits.  Because we had passed this ambulance buildings when we parked around the back of the hotel, my husband thought it looked like the back of a hospital so we were a little confused!

We checked in at reception and the staff were lovely and friendly.  Due to the shape of the building it was a long walk to our room.  This actually turned out to be a blessing as the room was very quiet.  It was clean and tidy and not a bad size. The only negative was the bathroom.  I always request a bath when we stay in a hotel and yes we did get one.  The only problem was you had to be about 4 foot tall to actually be able to relax in it.  The shower though was wonderful.  Very powerful.

The hotel itself is set in beautiful grounds and if the weather had been better we might have seen more of them.

The restaurant was good with a good selection of food.  The service was excellent.

So how would I rate it?  Well lets break it down and score it out of 10!

Value for money – 10 – I paid £110 for Dinner, bed and breakfast and a free bottle of wine with Great Little Break.

So not a bad score.  Would we stay again – probably yes, especially if I can get the same deal again.

This is 2 houses in 1 visit.  The first house is derelict and owned by English Heritage, while the other one just a few yards away is fully furnished and owned by the National Trust.  Both having amazing histories.  The sun is currently out so a fabulous day to start exploring the derelict one first!

This sadly is now a ruin but was originally the birth place of an Elizabethan lady called Bess of Hardwick.  One of the things I love about English Heritage sites is that you can choose to do a guided tour or an audio tour.  We always go for the latter as it allows us to wander at our own pace and take lots of photos.

Even though this home is now a ruin, you can still some of its original features.  As you listen to the history on the house and of Bess, you really start to feel like you know her.  By all accounts she really was a formidable women!  She had been married 4 times.  Her first husband died when she was only 16.   Her other marriages meant that she rose to the highest levels of English nobility and became extremely wealthy.  She was a shrewd business women with assets such as mines and glass making factories. In fact she was the richest women in England after Queen Elizabeth I!

Her fourth husband George Talbot really didn’t seem to like his wife very much and actually thought prison would have been a better sentence than being married to her!

It would seem that for Bess, showing off her wealth to everyone was important and that shows in both the halls.

Both homes have amazing views over the Derbyshire countyside.  It is strange then to wonder why Bess built the new Hardwick Hall a stones throw from her birth place.  I mean it wasn’t exactly small!  It was all about wealth I believe.  She didn’t abandon the old house when the new one was built as you would expect, she continued to live in both.  Unfortunately she didn’t continue to keep the old hall in good repair so it eventually became inhabitable and in the 18th century was opened to the pubic to visit it.  You can see though from the photos below what a stunning place it must have been in its time. 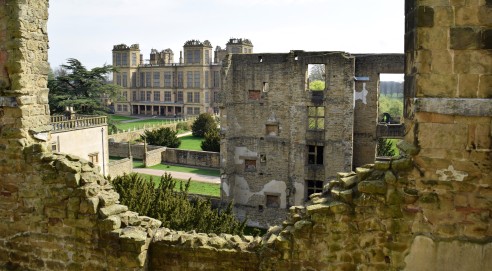 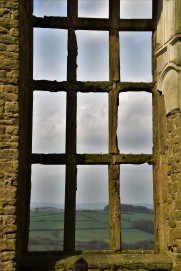 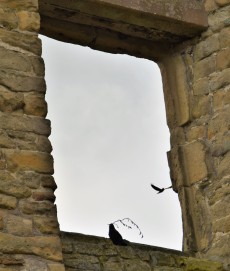 Bess started building her new home in 1590 and moved in in 1957.    It remained in her family until the mid twentieth century.  The house was designed for her by Robert Smythson.  To show off her wealth, she filled it with the most beautiful of tapestries.  Many of which are still on show today. 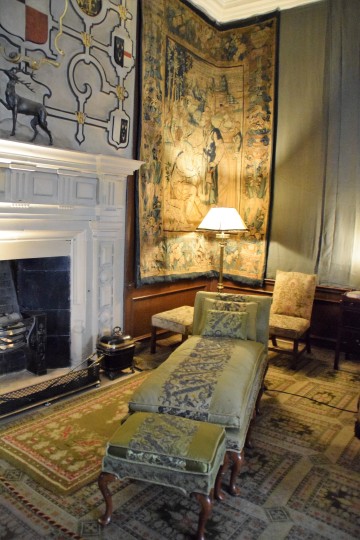 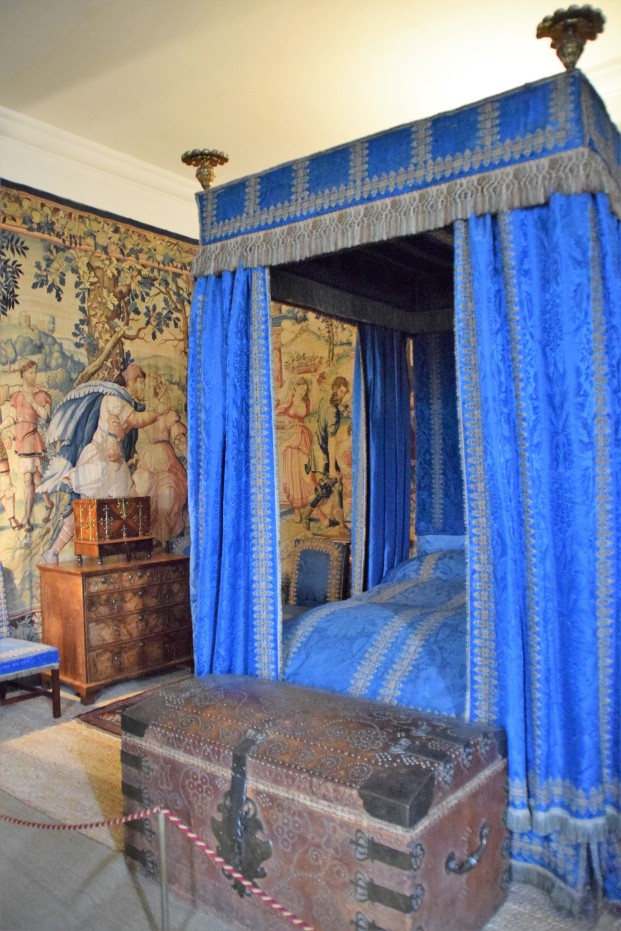 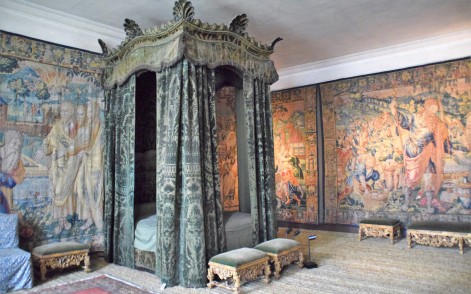 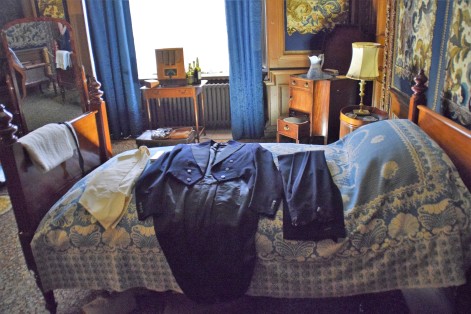 The house apparently has more glass than walls!  It was the first English house to have the great hall built on an axis through the centre of the house rather than at a right angle to the entrance.

The gardens too are stunning.  They are filled with herbaceous borders, vegetable and herb gardens and an orchard.  We were there in spring so most plants were not out but the daffodils and tulips were beautiful.  I also had a little friend visit me in the garden, who brushed past my knees when I was bending down to take a picture.  He stopped for a while to make sure he got into the shot too! 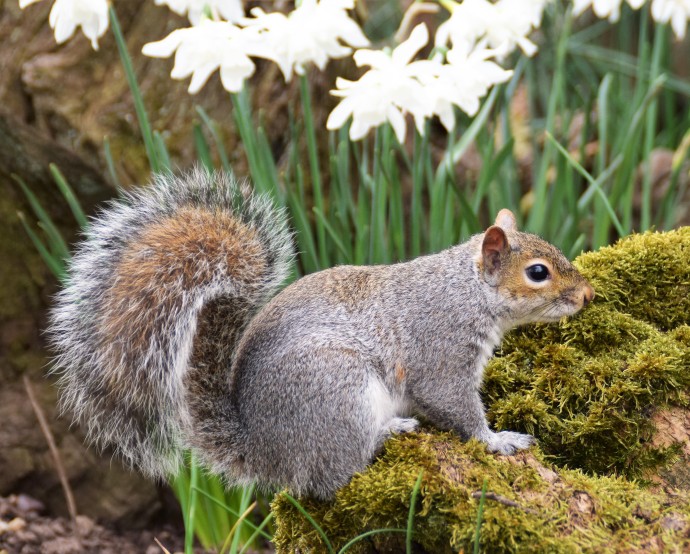 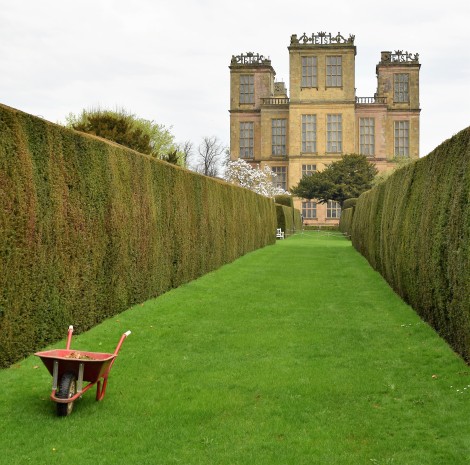 If you want a day out I would certainly recommend both of these houses.  Each has its own character and charm.   The audio tour of the old house gives you a real insight into who Bess was.  I could talk more about her but then it would lose the surprise when you go and visit the house yourself.

After touring the gardens and houses, the plan was to take a walk around the extensive grounds.  Unfortunately just as we headed off the heavens opened, so we had to abandon that idea and headed home.

As we were driving out of the estate we noticed a carpark which had amazing views back across the houses.  The rain had eased off so we parked up to take some more photos.  We were down by the estate lakes so decided to have a quick walk around them before continuing home.  We are so glad we did as it gave us even more understanding of the vast land that Bess had owned in her day. 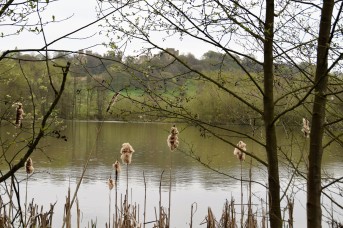 Getting out and exploring places like this is a wonderful way to get some exercise as well as to see some stunning landscapes and historical buildings.

We are members of both National Trust and English Heritage.  They cost around £80 each a year for a family ticket, however they are well worth it.  If you have children especially it is a great way to entertain them in the school holidays, teach them some history and also get a bit of exercise. In the last 2 days we have done over 35,000 steps which isn’t half bad!

To see more photos of our walk go to my YouTube channel https://youtu.be/JFgJ74hwPwg