I don’t know about you but I always find that whenever there is a bank holiday the week drags!  This week was no exception!

For some reason every 1st of the month this year I have developed a cold!  So on 1st April as I was having a lovely walk around Stratford Upon Avon, I could feel my throat start.  You know that feeling that you are swallowing glass.  For me that is always the first sign!    I would have liked to have spent Bank Holiday Monday in bed, but had my stepdaughter staying so that wasn’t an option!

As the week developed the cold got worse.  I really didn’t have an appetite which meant planning for meals was really difficult, as I didn’t know what I wanted.  It is so easy to just pick at junk when you are feeling like this!  I was in the office for the 4 days this week and despite feeling as bad as I did, I still made myself go to the gym!  I couldn’t go at the same pace as other weeks, but decided any exercise was better than none!

When it came to food, I was really good and decided that I would make sure I had every meal planned out for work at least.  That would be my biggest challenge as there is always a lot of biscuits and cakes around.  I decided that carbs was the way to go, so made a big batch of pasta salad which I split over a few days.  I reheat it at work with a couple of light cheese triangles.  Melted they make a lovely cream sauce which is part of my HEA.

Evening meals were more of a challenge.  I would take things out of the freezer that morning.  The problem was I really didn’t have any energy when I woke up, so by dinner time my levels were even lower!  Thankfully I always have a fridge full of fresh vegetables.  Again I loaded up with carbs by slicing up new potatoes and cooking them in garlic frylight with every meal!

By Thursday my motivation was rock bottom!  To make it worse, on the way home our train was stopped between Stetchford and Lee Hall stations.  The conductor said there had been an incident at Marston Green Station and so we had to wait.  Eventually after what felt like hours, they advised us that they were taking us back to Stetchford where the train would terminate.  It turned out that someone had run in front of the train in front of us!  You must be in a terrible state to feel that is the only option for you!  The train driver must also be so traumatised.  Its such a horrible thing to happen.

We are now though stuck at a train station miles from where we need to be.  If any of you commute regularly you will know that we are all creatures of habit!  We stand on the same spot on the platform each day so we meet the same people.  One of the ladies on our train quickly got onto the Uber App and ordered a taxi.  It was going to take 20 minutes but that was better than waiting to see what was going to happen – i.e. could there be a bus service laid on?  Even if there was it wouldn’t take us to our station as there is a low bridge!  My husband and I and another lady who also gets our train with us decided to join Natalie with the taxi and share the cost.  As we were quite far out, Natalie’s husband offered to come to Birmingham International to pick us up, so the taxi didn’t have as long to travel.   We finally got to our car at the Station an hour later than normal.  We still then had to drive the 30 minutes home.

I have 2 border collies who would be expecting us home.  I checked the CCTV to see if they were ok.  Bless them, as soon as the time comes for when we are normally home, both move to watch the front door.  I wonder what goes through their minds when we are late!

They were so happy to see us when we got home.  No accidents either, although Lola quickly told us to stop saying hello to her and let her out!!

I’m already exhausted from the cold, I’m now late home and the dogs still need to go for a walk.  We decide that it really is too late for me to start cooking!  Phew I was so relieved! But then the decision of what to eat!  If we had still lived in Warwick it would have been easy!  Fish, chips and mushy peas  for my husband and chicken kebab meat with salad and lemon juice for me!  We do have a chip shop in our village but it doesn’t do kebab meat as far as I know, and I don’t really like chips and definitely don’t like fried fish or anything in batter.  So that leaves Chinese or curry.  Hubby didn’t fancy a curry so a Chinese it was!  We didn’t have a menu as I have only eaten there once when I first moved to the village so went in blind.  I know what hubby usually likes so decided to play safe.  Beef and black bean sauce with Singapore noodles for him, and chicken in oyster sauce for me.  I should have ordered boiled rice but really couldn’t face it, so decided to pinch a few of the noodles! It was actually very tasty!

My cold was getting worse by Friday so I was so pleased I already had lunches sorted in fridge.  I quickly grabbed a lamb, chicken and dhal curry from freezer for dinner that night which I would add boiled rice to!  I am so pleased I have free food in the freezer for times like this.  It would be so easy to turn to junk food right now!

By Saturday morning I have had it!  I feel like death and decide that I’m staying in bed for the day.  I don’t have any real plans for today so I don’t need to get up!  I am not one for staying in bed.  I am the one up and out walking the dogs at the crack of dawn, or doing housework!  I knew the dishwasher needed emptying and the washing basket was full, there was dog hair on the carpets and don’t get me started on the kitchen floor!  Right now none of that mattered!  Well until  the postman woke me at 2 pm to take a parcel for my neighbour!  Then my OCD kicked in!  I couldn’t just lie around when there was so much work to do!

After a couple of hours cleaning I finally curled up on the sofa, only for my hubby to ask if I wanted to join him to walk the dogs.  I didn’t have to, he knew I was unwell, but I thought the fresh air might do me good and anyway, I needed the steps!

I decided I needed to pull myself together and make something for dinner!  I had some turkey mince in the fridge which I was going to make a pizza with (I will have to share the recipe with you sometime!) .  I didn’t fancy that now but I did fancy a lasagne!  Its amazing how you crave carbs when you are ill!

My husband doesn’t really like turkey but what he doesn’t know doesn’t kill him!

I mixed the mince, 1 chopped red pepper, chopped onion, tinned tomatoes, 10 slice chestnut mushrooms, 1 pint of beef stock (to hide the flavour of turkey!), pepper, 4 tablespoons of Worcester sauce, 2 tablespoons of tomato puree into a frying pan and cooked it for about 15 minutes. Just before the end I added 2 large handfuls of mixed frozen vegetables.

I lined a lasagne tin with sliced courgette.  Added a layer of the mince mixture then topped with lasagne sheets.  I repeated this until all the mixture was used up!

I then mixed 500 g of quark with 3 eggs and topped the pasta.  Baked at 150 degrees on low shelf for 50 minutes.  Then added grated cheese and cooked for another 10 minutes.

I served it with garlic bread.  For hubby it was the shop bought bread but for me I took 2 slices of wholemeal bread (HEB), sprayed with frylight butter and spread with Lazy Garlic.  Both were baked in oven for 10 minutes until golden.  Absolutely delicious.  I also have another 4 portions left for the freezer for lazy days!

My husband was even heard telling my parents today how nice it was !!

Today i’m treating my parents to Sunday dinner.  I’ve booked Charlecote Pheasant by me.  Its a carvery and really good value for money.   I had pate to start, that was the healthiest option, then a lovely roast for main.  I was trying to keep on plan but its very hard at carvery’s as you don’t know what they have cooked the veg etc in.  I opted to fill up on the protein so had a slice each of ham, pork and beef, 1 yorkshire (well its not a roast with out one!), carrots, beans, red cabbage and 2 of the smallest roast potatoes I could find.  It was all cooked so well.  I decided to skip dessert.  I did have a look but nothing took my fancy so decided not to have one for the sake of it.  If you ever want lunch out I would recommend it.  For 4 adults, 3 having 3 courses, me 2,  including 2 glasses of wine, 1 pint Cider and 1 pint of coke it all only came to £80.

The restaurant is bright and traditional.  There is plenty of room if you want to bring a large group. 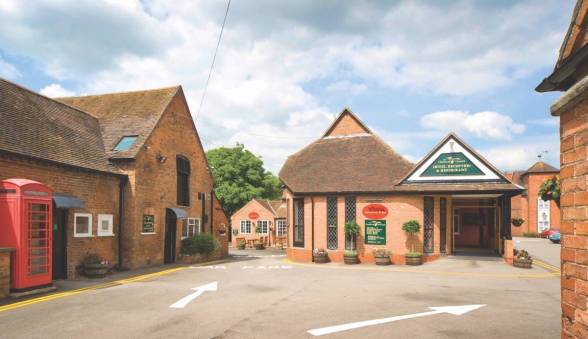 I’m now suitably full so I won’t need to eat again until tomorrow.  Lets just hope the week ahead is better!

Looking back this week could have been a complete disaster.  You can’t plan when you are going to feel ill, but you can plan for those times when you need something quick any easy.  Keep your fridge full of fresh vegetables and the freezer full of healthy options.  Batch cooking is your savour on weeks like this.  Planning is the key to successful food optimising !